GWFT Go With the Flow Technologies Inc. is pleased to announce that Seeley’s Cove Research Centre Inc. has become a significant Shareholder in GWFT.

This Agreement cements the relationship between the two Companies, and increases the potential to advance the development of the Next Generation of the TCSC technology on several fronts.

William (Bill) Jones brings with him many years of ocean experience gained in the development and operation of the AquaCannon, an essential tool embraced in the Aquaculture Industry world wide. Bill will join the GWFT Team as one of the three development Principles.

Design of the next Generation of the Tidal Current Surface Crawler (TCSC), also known in the Patent language as the Endless Belt Generator, is progressing well with the completion of the Track, Drums, and energy capturing Interface Paddles. Completion of the frame design will lead us to the exciting Power Takeoff options.

This present version of the TCSC Prototype will focus on grid capable power generation leading directly to electrical operation of the Seeley’s Cove AquaCannon. To this end, the Seeley’s Cove Research Centre facility in New Brunswick will be the manufacturing hub for product orders received.

In parallel with the foregoing fabrication process, GWFT will simultaneously be focussed on the development of multi-staged air compression using the same TCSC Prototype and tidal energy. The product of highly compressed air will have many valuable attributes including:

“In Synergy with Nature”

Article published in Inside Marine magazine 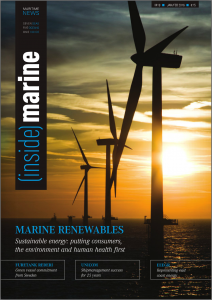 Click on the magazine pages below to enlarge.
Also, read the article online at
insidemarine.com/796575/m19/FLASH/index.html, pages 14-17. 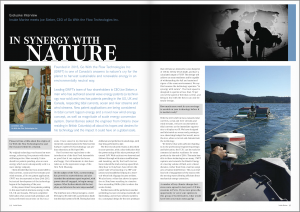 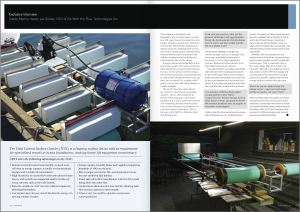 GWFT has its fourth ocean test under its belt. The interactive ocean footprint of the Tidal Current Surface Crawler (TCSC) prototype is a mere 4’ wide by 8’ long with a penetration depth of 0.8’. This interactive fluid volume represents a tidal grip on the track that has been measured in its driving force, a force that drives the Endless Belt Generator on a continuous basis.

We have already confirmed in our first test that the prototype is sea-worthy and that the track begins to rotate with very little effort, with the power takeoff engaged, to power a 2HP compressor. This picture represents the very first (ready to be) deployed version of the TCSC prototype.

Testing has been done systematically, focussed on small steps followed by modifications where weaknesses and improvements could be identified.

With four tests now under our belt, we have reduced the track start-up rotation from 3km/hr to 1km/hr, and at this speed of rotation we expect it to be applicable for slow currents such as the Gulf Stream.

In addition to achieving compressed air exceeding 20psig, our second test has also presented us with a question/dilemma “When is an equipment failure a triumph”?

One can best ponder this question in the context of an equation, and we will leave it for others to consider the value of the answer.

WORK is the application of a FORCE over a DISTANCE, with the related POWER being derived by applying the TCSC track speed.

Our 150lb tensioning instrument failed beyond its limit, and we estimate the driving force approached the 200lb value.

The driving force represented by the tidal grip commands some attention, as this represents the force of the tidal stream as it is directly applied to the power takeoff on a continuous basis.

It is to be noted that this is our first ocean prototype, supported by a shoe-string budget and dedicated workmanship, in which the design has been outstripped by its success. Although we expect some more revealing results, this initial design has done its job and has set us on a course to produce a well-engineered saleable working commodity in 2016.

Our vision, when funding allows, is to successfully challenge the tidal industry with this new innovation and its potential green energy solution. We will shortly be seeking investor support to propel the GWFT technology to commercialization. For Investment Opportunities with GWFT, please refer to Contact details in our website www.sifet.ca. We are open for business with an imminently saleable product.

Design of our next generation prototype is well underway, and we expect and are capable of providing a means of applying tidal current energy to loads such as Seeley’s Cove AquaCannon.

GWFT Go With the Flow Technologies, the newest Tidal Current Energy Company, has recently gained membership in Marine Renewables Canada. GWFT has set its sights high in its quest to commercialize this innovative totally green technology, and has conducted its first ocean ready test of the Tidal Current Surface Crawler (TCSC) on September 22, 2015.

Our initial test was to determine (1) its’ seaworthiness and (2) the minimum speed required, with power takeoff engaged, to begin energy capture.

This micro prototype has an active ocean interface footprint of just 8 feet by 4 feet with a submerged interactive depth of 0.8feet. To view an animation, go to www.sifet.ca

With the power output increasing as the square of the velocity, grid connected capability is assured.

Application of this technology can be on all three of Canada’s oceans and innumerable rivers and streams. Patents pending are in Canada, US, and GB, with the technology licensed to GWFT.

GWFT Go With the Flow Technologies Inc
– in Synergy with Nature –

News Release: April 17, 2016 GWFT Go With the Flow Technologies Inc. is pleased to announce that Seeley’s Cove Research Centre Inc. has become a significant Shareholder in GWFT. This Agreement cements the relationship between the two Companies, and increases the potential to advance the development of the Next Generation of the TCSC technology on […]